Ministers face a bill of over £27 MILLION after the Supreme Court rules that employment tribunal fees are unlawful and must be stopped. 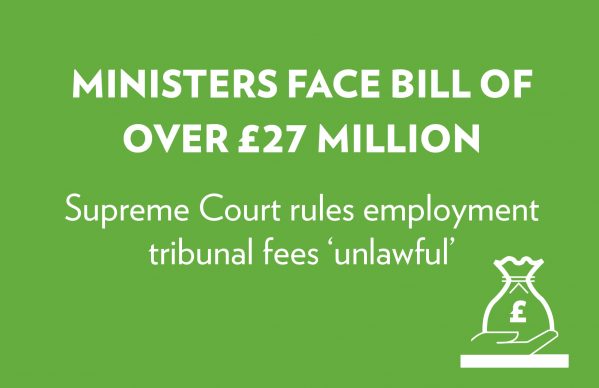 This week the Supreme Court ruled unanimously against the government and found it was acting unlawfully and unconstitutionally when it introduced the unrealistic charges in 2013.

Employment tribunal fees were introduced in a bid to reduce costs and decrease the number of weak cases brought to the employment tribunal. Employees have been required to pay up to £1,200 to fight their case in tribunal.

Statistics show that between 2013 and 2016, the number of employment claims have reduced by 70% – working well for the government proposal.

Unison battled to scrap the fees, arguing they prevented workers from seeking justice. Unison general secretary Dave Prentis declared the ruling a ‘major victory’ for workers. “The Government is not above the law, but when ministers introduced fees they were disregarding laws many centuries old, and showing little concern for employees seeking justice following illegal treatment at work,” he said.

After the ruling, justice minister Dominic Raab said: “The Supreme Court recognised the important role fees can play, but ruled that we have not struck the right balance in this case.”

Justice Minister Dominic Raab has confirmed that the tribunal service will stop charging fees with immediate effect, and steps will be taken to refund all those who have paid fees since the introduction of the scheme – estimated to be over £27 million.

Any employee who feels they’ve been treated illegally or unfairly will now be able to bring a claim against their employer without the financial burden.

If you have any concerns, please speak to a member of our team. We will happily put you in touch with experienced Employment Law experts that will help you through the process.